As far as the applications are concerned, modern snowshoes can be categorized into three types, which are recreational, backcountry, and running snowshoes. Learning about them may help you decide which snowshoe would likely perform the best for you. If you’d like a shortcut, we have compiled the 10 best snowshoes of 2019. 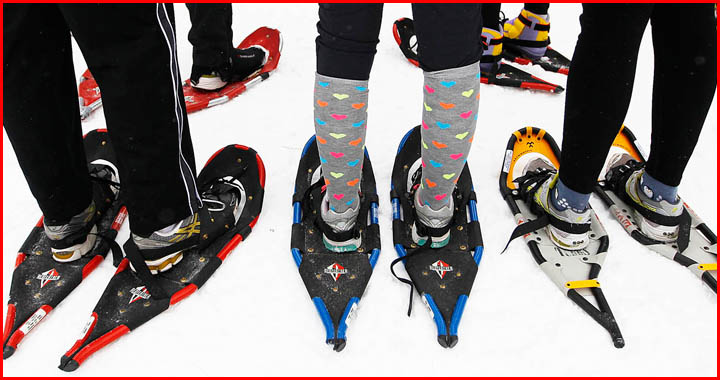 As the name suggests, this type of snowshoes is best used for recreational purposes. If you just want to walk around a groomed trail in your area, this snowshoe is for you. In terms of features, they have everything what modern snowshoes have, such as composite decks, crampons, aluminum frames, etc. However, they’re commonly made of second-grade material, which is what makes them more affordable. These are like aluminum crampons, instead of steel, cheap plastic decking, poor finish on the frames, and whatnot.

That being said, they still offer adequate performance for beginner snowshoers. You should be able to cover any flat to moderately rolling terrain without too much problem, assuming you pick out the right size. Some of the best recreational snowshoes are MSR Evo, Atlas 10 Series snowshoes, and Tubbs Xplore. They cost around $100-$150. That’s pretty cheap considering they’d last for a couple of seasons. If you opt for renting them, they may cost around $10 for a short day hiking.

These are the upgraded version of recreational snowshoes. Every feature of backcountry snowshoes is better. They’re commonly built of premium materials that can stand more abusive applications on the backcountry. The crampons are bigger, tougher, and more aggressive. The binding straps are freeze-resistant. And, the frames are made of better alloy with a better finish. Obviously, they’re pricier, but if you want to blaze your own trail into the backcountry drifts or tackle some very technical terrains, this snowshoe is for you.

One of the top-rated backcountry snowshoes is Tubbs Mountaineer. It’s slightly heavier than common snowshoes, and if you choose the large model, you can’t help but feel a bit awkward on your feet. In exchange, you get a pair of snowshoes with tougher construction and better support. The binding is connected to the frames using a full rotating pivot that makes the tail of the snowshoes drag on the snow as you walk. You won’t be able to walk fast, but it helps a lot when the going gets steeper. You get to kick in the snowshoes better, allowing the toe crampons to dig deeper into the snow.

This type is completely different from the previous two in a way that it’s designed to be as light and minimalist as possible. Running snowshoes are built by keeping optimum maneuverability in mind, enabling you to run on the snowy trail more effectively. Prices vary by much. Some models like Louis Garneau Course 721 snowshoe cost nearly $300 and others like Dion snowshoes charge around 150 bucks. Note that the more expensive models are doesn’t necessarily mean they’re better. The two snowshoes I mentioned before are used by many snowshoe runners, regardless of the huge price margin.

If you’re just picking up a pair of snowshoes to run for your new big thing in winter, it’s best to choose the inexpensive one like Atlas Run snowshoe or Dion snowshoe. They’re in no way a poor performer, but the low price tag they offer allows you to get the hang of this exciting sport without investing high dollars. I personally prefer Atlas Run snowshoe as it’s solid and moves well in any snow condition. But, if you want a simpler, smaller, and lighter snowshoe, Dion is the way to go.

Have you made up your mind which type of snowshoes suits best for you? Getting the right snowshoes to address the purpose of your snowshoeing is a step closer to a safe, high-performing, and satisfying snowshoeing experience.