Tubbs has been around since 1906, well over a century ago. If there’s a company that knows how to make good snowshoes, it’s Tubbs. 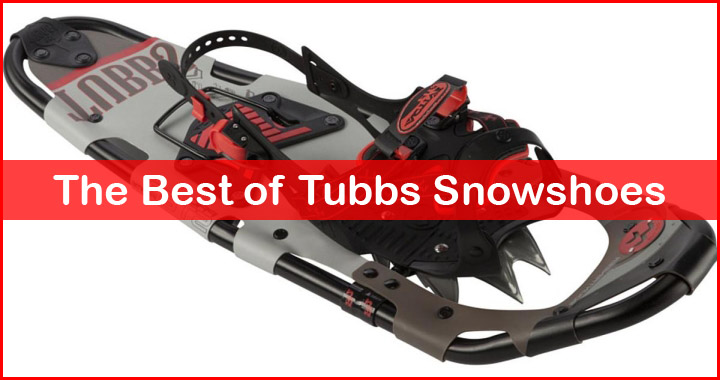 Tubbs is another company that you should check when looking for an ideal pair of snowshoes. They have been around since 1906, a time when they still focused their business on crafting handmade traditional snowshoes made of white ash wood. These days, they manufacture modern snowshoes, featuring aluminum frame or entirely composite construction. Have I told you that they’re also the first company to realize the physical difference of women, thus start manufacturing women’s specific snowshoes? What I’m trying to say is, the designers and engineers at Tubbs know what they’re doing. They know what it takes to make good snowshoes with sufficient flotation, traction, comfort, as well as security.

Tubbs manufactures various types of snowshoes to suit different needs. From the highly-technical backcountry snowshoes like the Mountaineer to the entry-level recreational snowshoes like the Frontier. All of their snowshoes are available in women’s and unisex versions. Furthermore, they can be categorized into two, based on the construction: Traditional and Flex. Tubbs Mountaineer and Tubbs Wilderness are among the traditional models. They adopt the common large oval shape frames made of aluminum, just like common snowshoes these days. Meanwhile, Tubbs Flex snowshoes are somehow similar to MSR Evo. The frames and the decking are made of one single part made of high-quality composite. 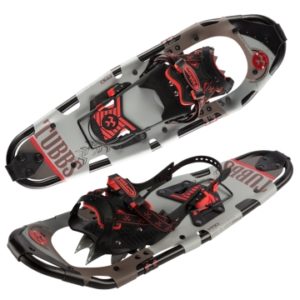 What’s Not: Heavy and bulky

In our opinion, Tubbs Mountaineer are the most versatile snowshoes today. Their performance as backcountry snowshoes doesn’t need to be doubted at all. Maximum flotation on fluffy deep snow, solid traction systems that can take you anywhere regardless of how steep the slopes are, full rotation bindings that don’t restrain your feet motion, what more can you ask for? Every single part of these snowshoes has been designed precisely to deliver a satisfactory experience. Moreover, they’re also comfortable enough to be worn on trails for fun recreational snowshoeing with friends or family. The smart arrangement of the crampons underneath the decking has allowed them to be more stable on packed snow and groomed trails. It greatly reduces the discomfort that’s normally prevalent when you wear snowshoes with aggressive crampons on trails.

The ActiveFit+ bindings on Tubbs Mountaineer are pretty effortless, too, which is a plus point if you’re a beginner. You can set and adjust them even without taking off your gloves. All it takes is to pull the side straps (or “Wings” as the company calls them) to opposing direction to fasten the bindings. The only thing that makes us prefer MSR Lightning Ascent is because these snowshoes are kind of heavy and bulky. Sure, you can choose to get the 25-inch version, but that won’t provide you with the flotation you need to cover deep snow as the 36-inch version does. 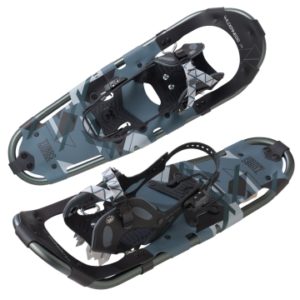 Popular among winter hikers and backpackers, Tubbs Wilderness is what we recommend for those wanting an all-day comfort upon exploring intermediate terrains or walking down the trails. They’re a step down from the full-fledged backcountry snowshoes, Tubbs Mountaineer. They’re a fine piece of recreational snowshoes that pack enough traction to tackle some moderate rolling hills. That’s pretty great, considering many typical beginner snowshoes have limited application on groomed trails only. The frames and decking are almost similar to the Mountaineer, with the latter having a longer nose (the front part that bends upward). In fact, they’re also available in three different sizes: 25-inch, 30-inch, and 36-inch. So as far as the flotation is concerned, Tubbs Wilderness is only slightly behind Tubbs Mountaineer.

The underfoot crampons are less aggressive than Tubbs Mountaineer, but they provide ample traction to tackle packed snow, both off-trails and on-trails. There are also side crampons under the hills that help with the traversing and the overall stability. However, you’re going to need more than that, should you hope to climb over steeper inclines. On to the bindings, the straps-in feature on Tubbs Wilderness is unique. The single strap goes over your front foot in a zigzag pattern with a lock mechanism on the side. It improves the security on your feet while keeping everything simple. 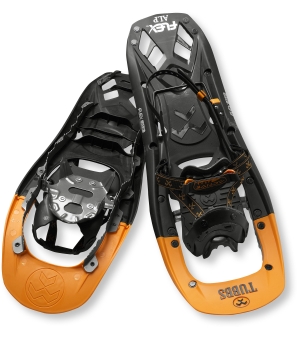 Tubbs Flex ALP are the second most advanced backcountry snowshoes by Tubbs that incorporate the innovative FLEX design. Unlike common modern snowshoes, this FLEX design doesn’t come with any standalone aluminum frames. Instead, the whole frames and tails are made into one single part with the decking, all of which are constructed of a heavy-duty composite. The result is you get snowshoes that are lighter and flex on the rear, absorbing impacts on your heel as you stride. It significantly reduces stiffness on your feet as you walk on hardpacked snow. It’s pretty much like MSR Evo, only the Flex ALP by Tubbs are much longer.

The traction systems on Tubbs Flex ALP rival the aggressiveness of MSR Lightning Ascent. They consist of a set of huge carbon steel teeth under the balls of your feet and rigid side rails that extend and curve all the way to the nose of the snowshoes. While the heel crampons are absent, such systems are more than capable of giving you the necessary traction to ascend steep hills. Sadly, the longest size available for Tubbs Flex ALP is only 28-inch, and the recommended maximum weight load is 220-pound. So, when it comes to flotation on deep soft snow, Tubbs Mountaineer and MSR Lightning Ascent still have the upper hands. 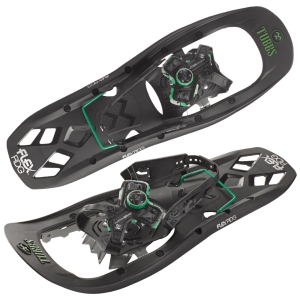 Tubbs Xplore Snowshoes are a great set for a beginner. These snowshoes have an easy-to-use binding system. They are lightweight and ideal for hikers in the 80 – 150lb range for the 21″ snowshoes and 120 – 200 lbs for the 25″ shoes. These have a lightweight aluminum frame and are priced extremely well for an introductory snowshoe set.